There are two character sheets you can use to track your RuneQuest adventurer for your game. We recommend the Adventurer Folio for new editable adventurer sheet to add additional details.

You can see an example of a filled-out adventurer—Vasana. 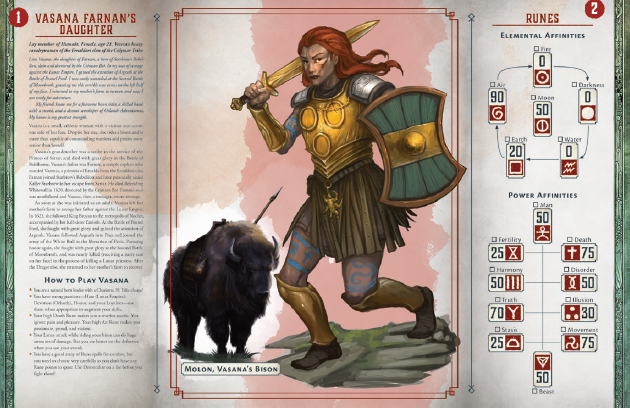 A quote introducing the adventurer in their voice, their background and personal history, and suggestions about how to roleplay them.

The Runes the adventurer is most aligned with. These influence personality and are used to cast Rune magic. Runes are described here. 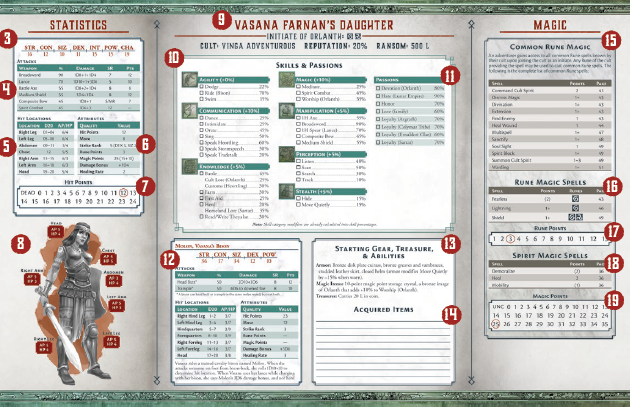 Adventurers are defined by seven characteristics.

Attacks the adventurer uses, described by name, skill percentage, damage, strike rank, and their hit points. See here for more about weapons and here for a description of how strike ranks work. Missile weapon ranges are here. Spirit combat is included, though is less common.

The adventurer’s hit locations. When injured, roll a D20 to determine where. Each hit location’s armor and hit points are presented as armor|hit points. See here for more on armor, hit points, and damage.

Mark these off when taking damage, tracking them separately. At 0, the adventurer is unconscious, going below 0 for too long means death. Natural and magic healing and First Aid restore lost hit points.

This displays the adventurer’s hit locations. AP is armor points (subtracted from damage) and HP are hit points.

The adventurer’s rank within their cult and that cult’s Runes. Reputation measure of fame (see here), and Ransom determines how much someone is worth if captured alive and sold back to kin.

The adventurer’s skills and their ratings. The bonuses are skill category modifiers, already calculated into the skill totals. Skills are described here.

Some adventurers have mounts, pets, or allies. These are described for pre-generated characters.

Here is the adventurer’s armor, magic items they may possess, starting wealth or treasure, and special abilities. Money is measured in silver coins called Lunars (L).

Write any treasures or items the adventurer finds here.

Rune magic is magic using the Runes and is divine in origin. Every initiate of a cult is taught these common Rune spells and can cast them, using Rune points. Rune magic is described on here.

These special spells are specific to the adventurer’s cult and are cast using one of the listed Runes. See the Rune spell descriptions here.

Rune spells are cast with Rune points. Cross these off whenever the adventurer successfully uses Rune magic. See here for more on getting Rune points back.

Spirit magic is common magic, where spirits in the world perform magical acts in return for magic points. Use the adventurer’s POW×5 as the chance to cast spirit magic.

Usually equal to POW, magic points are a resource spent by successful use of spirit magic. They come back each day naturally.