The Elder Races of Glorantha are identified as such because they pre-date the appearance of humans in the world. Elder Races include many small, strictly local, or otherwise insignificant creatures. Those powerful enough to dominate significant parts of the world are elves, dwarfs, trolls, merfolk, dragonewts, and broos.

Unlike humans, who may have any Rune as their primary Runic association, all Elder Races have an indelible and innate connection to a certain Rune or Runes. 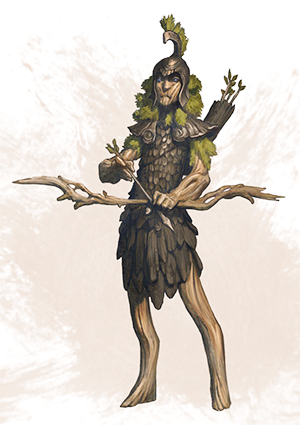 The race known as the Aldryami consists of elves, dryads, pixies, and runners. They belong to the vegetable kingdom. Essentially mobile plants, Aldryami are significantly different from other humanoids and beasts.

Aldryami commonly associate in forest communities. Since all claim descent from (and actively engage in worship of ) the goddess Aldrya, the members of these mixed forest communities are collectively named after her—Aldryami.

Elves come in various races, identified as colors by humans, dependent upon the type of forest in which they are found. The green elves are native to coniferous trees, the brown to deciduous temperate forests, the yellow to tropical jungle, and the red to ferns and other primitive plants.

The primary Rune of the Aldryami is the Plant Form Rune.

The green elves, or vronkali, were the most important elf type in the Great Darkness but have lost ground since then. Green elves are of male or female gender, and do not breed with dryads. They do not sleep in winter but experience a daily period of rest. Green elves are associated with coniferous forests. They inhabit cool temperate lands. In snow, they can ski cross-country with carved magic wooden shoes. In warmer lands, they often share their forests with brown elves.

A green elf typically weighs about 65 kilograms and stands a little over 170 centimeters tall.

Special Notes: Like the trolls, their eternal enemies, green elves are vulnerable to the “new metal” iron and cannot handle it. Any damage from an iron weapon penetrating their armor will do twice the normal damage.

Armor: Green elves have no natural armor but often wear 2-point armor made of treated bark or other plant materials. They often wear cloaks made of leaves that add +20% to their Hide skill in an appropriate forest. They generally prefer to Dodge rather than parry.

* Special elf bow, will wither in any but elf hands. An elf bow can store 2D6+2 magic points for its user. Its range is halved in the woods. 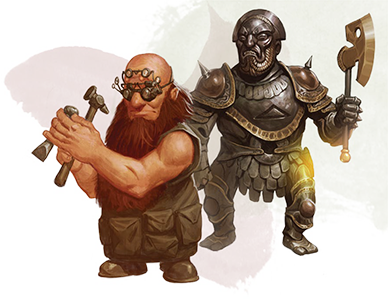 Also called dwarfs, the Mostali claim descent from Mostal the Maker, a primeval deity said to have created the World. The dwarfs have a long and ancient history, most of which is unknown to humanity. They are pragmatic and stoic, happy with practical matters and unafraid of hard work, and are conservative and secretive to an extreme. Their hard religion offers them personal immortality. The official dwarf religion is a sorcery of a limited, but practical, variety.

The Mostali are locked in eternal war with the elves (dating from the early Gods War) and are no friends to trolls. The enmity of elf and dwarf predates the current form of both species and reaches back to their creation. The byword of their relationships with other intelligent beings is always mutual distrust.

The dwarfs are divided into occupational castes that often behave like separate species. Only the soldier caste—the Iron Dwarfs—is regularly seen outside their underground cities. The iron discipline and unyielding attitude of dwarf culture is inhuman in its rigidity. Most humans cannot understand their machine-like state of mind. Apparently, many dwarfs cannot either, for there is a significant rate of desertion from the ranks. These are considered heretics by conventional dwarfs, and in some places, they form whole societies.

The Mostali were the first to discover iron and were the first to learn to work it. They have created many other constructs to aid them, from gargoyles and the stone giants called jolanti, to even more exotic constructs like the Alchemical Transformer and the Cannon Cult.

Armor: Coat of unenchanted heavy dwarf iron chainmail (9 pts.) and full helm (9 pts.). The dwarf has a 70% chance of being unaffected by any spell cast at them.

Runes: All dwarfs have the Earth and Stasis Runes at 80% or higher.

* Damage against an elf or troll that penetrates armor is doubled. Can strike creatures immune to normal weapons.

Note: The dwarf crossbow is a repeater. It fires once a round without needing to reload, until all five quarrels in the clip have been expended. It takes three rounds to refill the clip.

When first made, a dwarf is assigned to a specific caste named after the ancient Mostali races of metallic beings. Every metal has certain types of dwarfish tasks associated with it. A dwarf performs only those tasks, except during Sacred Time, when special tasks must be fulfilled. Thus, there are Rock dwarfs, Gold dwarfs, Copper dwarfs, and so forth, each carrying forth the tasks which the ancestral Mostali once performed. These castes are not ranks, and form no hierarchy, but most closely resemble professions.

The classes are: Rock, Lead, Quicksilver, Copper, Tin, Brass, Silver, Gold, and Iron. Usually counted as a separate class are the Diamondwarfs, who have reached perfection in their craft. Diamondwarfs are the pinnacle of dwarfdom, serving to replace the forever-lost Mostali. Each caste has its own Diamondwarfs, thus there are Iron Diamondwarfs, Gold Diamondwarfs, and so forth.

They mine, quarry, dress, and build with stone. They are the architects and sculptors of dwarf society and build cities and laboratories. They work in cement as well as stone.

They invented plumbing, and later developed glassblowing. They work closely with the Quicksilver dwarfs. Lead dwarfs also specialize in making seals and wards to prevent entrance or to block off forbidden areas.

They know the art of transmutation and the science of alchemy. They brew terrible compounds in their fuming labs, and know the secrets of gunpowder, medicine, and all forms of vitriol and potions. They also make the dwarf version of food. Although they use magic, they specialize in manipulating physical elements.

They make tools, containers, and some weapons. The original Copper Mostali created the world’s first coinage: clacks. One of their tasks is to manufacture the special magical conduits which purvey energy to all the parts of a dwarf factory.

They summon and control those useful creatures, Earth elementals. They create the semi-living constructs such as jolanti and nilmergs which work for the dwarfs in specialized tasks, hard labor, or harsh environments. They also manufacture replacement limbs and organs for crippled dwarfs, and the cans that store dwarf food.

They are alloyists and metallurgists. They create new metals from combinations of old ones. They are also in charge of heating the forges and keeping the necessary heat channeled to appropriate spots and at the correct temperature for the job at hand.

They are enchanters and sorcerers. All dwarfs learn sorcery appropriate to their caste, but these specialize in working with magic power. Some construct great enchantments taking centuries to complete. They say they made the Red Moon.

They represent the mind of Mostal. They are teachers and maintain the continuity of dwarf society through correct education and indoctrination. They keep the lore of the dwarfs.

Dwarfs are but rarely seen by outsiders anymore. Since the old wars they have withdrawn almost completely from contact with mankind. Some old places are kept, more like outposts or curiosities than the thriving metropolises they used to be. Any dwarfs sighted are often Iron dwarfs, which has also distorted many impressions concerning this race.

The Iron dwarfs worship, or claim descent from, that metal. Iron is not a natural mineral but was invented by the Mostali race as a Bearer of Death in the Gods War. It was made specifically against their traditional foes: trolls and elves. Many people since then have heard ancient Mostali claim that they would have made it work against humans, too, if they had known what would happen.

Iron dwarfs are of two types. The first are Makers of Iron. They are the blacksmiths and they once held the secret of working iron inviolate until robbed by the Third Eye Blue people of the land of Fronela many centuries ago. The second are Makers of Death, and they avenged the Makers of Iron years ago, so that people now have only a small part of the Iron God’s secrets. For instance, mankind can make iron swords, but they did not learn the art of making iron firearms.

Iron was invented to serve as a weapon of the dwarfs, and as armor. The Iron dwarfs are the armor of the dwarf race, shielding all the softer peoples deep in their subterranean world from the ravages of the wicked outer world. Dwarfs believe that their Cosmic Machine was broken in the Gods War, and they do not think their lot will improve until it is all fixed again. This will not occur soon, and the dwarfs are patient, believing that the Gods War is still going on. Thus, they stand fast, in their retreats, and leave the Iron dwarfs to face the outer world.

If dwarfs are strict, Iron dwarfs are even more stern and steadfast. They are usually quite paranoid about their safety, and rightly so. They go clanking about clad in the most coveted metal in the world, iron, and their arrogance and unyielding way often provoke hostility where softer words would have been better. But only the best of their crop bother going above ground, and only in an emergency. The rest of the time they simply use their vast system of underground tunnels. 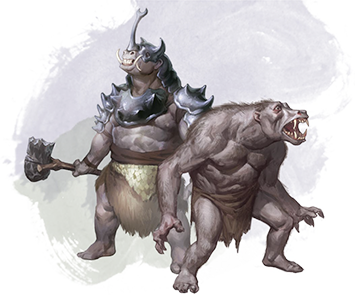 Trolls are principally a mountain-dwelling race, at perpetual war with elves and dwarfs, and dealing with mankind as the occasion demands. The dispersion of trolls was so great during the Gods War and since the Dawning, that several distinct breeds arose, as well as one blasphemous crossbreed with man, the tusk riders. All trolls have an aversion to iron, the “poison metal,” refusing to handle it and taking double damage from weapons forged of it.

The trolls call themselves Uz, a word which can be translated as “the folk.” More specifically, Uz is the living part of Kyger Litor that is also the incarnation of all trolldom. Uz is a mundane appendage of the great Darkness goddess, who has further powers in her own worlds beyond the reach of Uz.

Dark trolls are the current basic stock of the uz, deferring only to Mistress Race trolls for positions of authority. They are fully intelligent and use all weapons and magic. Their Darksense is not as good as that of the Mistress Race, but to compensate they have eyes which—though farsighted and colorblind—are useful in open spaces, heights, and depths.

They have a sense of smell far superior to that of the Mistress Race. Females generally have two breasts. In ancient times, before the Curse of Kin, dark troll females occasionally bore twins or triplets. Since the Trollkin Curse, trolls have decreed that all multiple births are trollkin.

About 30% of any normal troll community consists of dark trolls, the remainder being trollkin with a smattering of great trolls. Many wild troll families consist of dark trolls only. Both great trolls and trollkin are born to dark troll mothers, though the reverse is not true.

Characteristics given below are for male dark trolls. The females, who rarely need to leave their dwellings, have 3D6+10 SIZ.

Runes: All trolls have the Darkness Rune of at least 60%.

Special Rune Magic: As per cult.

Magic: Dark trolls worship a pantheon of Darkness deities headed by Kyger Litor. Zorak Zoran is an important war god for trolls. All magics are available to them although most trolls only have Rune magic and spirit magic.