Glorantha is a fragile bubble of stability in an infinite maelstrom of Chaos. That stability is precarious, as the Gods War proved. Only the Cosmic Compromise prevented Chaos from consuming the universe.

Chaos tends to reestablish itself. This threatens the existence of Glorantha and the deities. Though Chaos is itself formless and structureless, mutual corruption of Chaos and Order occurs at the weakened seams of the world where Chaos leaks in. As with many aspects of Glorantha, this corruption is personified—embedded and manifested in disgusting, cruel, and evil living things.

Chaos can enter Glorantha in any of several ways. Spontaneous appearances are rare but possible. As the world randomly arose from Chaos, so Chaos may randomly reassert itself. Once in the world, Chaos will spread. However, Chaos can also enter the world through the actions of people. Chaos can be deliberately summoned, as when the Unholy Trio allowed Wakboth to enter Glorantha. Tragically, even the best of people, desperate to save themselves and the things they love, unwisely invite evil into the world in this way.

The living manifestations of Chaos naturally parody other kinds of life of Glorantha, since they represent corruptions, perversions, or reorganizations of it. Therefore, Chaos comes in many forms—broos, gorps, disease spirits, walktapi, scorpion men, and so on. Some aspects of Chaos steal life force and POW, other aspects break down ways of organizing (such as government and religion), and still other aspects simply destroy everything possible.

Intelligent mortal beings naturally fear obvious forms of Chaos. Atrocities against nature are easily recognized. But Chaos also includes good, at least according to those who embrace the Lunar religion. Through Illumination they can overcome fear and resist the soul-blasting temptations which their attitude risks. Most Gloranthans do not believe this, however.

The battle against Chaos is integral to the mythology of Glorantha; without it, the world as it exists is not understandable.

These filthy creatures have the heads and breasts of human females, but the rest of their body resembles that of a vulture. Harpies are notoriously filthy and delight in befouling the food and bodies of others. They are cowardly and will fly away if attacked unless they outnumber their foe. Any article of food struck by harpy dung is disease-carrying and completely inedible (except by harpies).

Harpies delight in snatching small objects from their owners and performing other petty torments. They are extremely vindictive and will follow an enemy (at a safe distance) for many kilometers.

Magic: Many harpies belong to foul cults like Mallia, and learn spirit magic such as Binding, Ironhand, and Speedart.

* Both claws may attack simultaneously. A victim wounded by a harpy’s claws is automatically exposed to a random disease.

*** Victim must wash in wine to clean off. Until the victim has done so, only creatures of Chaos would associate with the victim. The victim is also exposed to a disease. 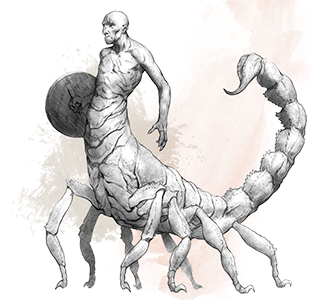 More scorpion than men, they are a sort of man-scorpion centaur, with the chest, arms, and head of a man, but the abdomen, tail, and rear six (sometimes eight) legs of a scorpion. Not being fully mammalian, they are not considered to be among the Beast Men.

They are a Chaos breed, left over from the Great Darkness. They live in small villages, each containing a single Scorpion Queen who continuously spawns masses of glutinous eggs. In every hatching are many males and a few females. The females live a subservient, secluded life until the Queen dies, or a new village is founded. At that time, one of the females begins to grow fantastically, eventually becoming the new Queen.

Scorpion men know little magic, for no one will teach it to them. They make their living raiding and hiring out as bodyguards to optimistic employers who forget their essentially Chaotic nature. Scorpion men are cannibalistic omnivores, eating both their own kind and members of other sentient races. They are extremely rapacious, and in times of extreme food shortage they may devour all animal and most plant life over many square kilometers.

They live primarily in the Rockwoods and the Wastelands, though like the broo they can be found almost anywhere in Genertela.

Scorpion men fight with human weapons and their tail stinger at the same time.

Chaotic Feature: A scorpion man has a chance of having a Chaotic feature equal to its POW×5 on D100.

Note: Like arthropods, a scorpion man may lose a leg without suffering any further damage to their total hit points. Any damage in excess of double a hit location's hit points are ignored. If two on the same side are lost, any Agility-related skills are halved: three legs lost on a side immobilizes it.

* A scorpion man can attack with club and sting the same melee round. The sting injects a systemic poison with a potency equal to the CON of the scorpion man. 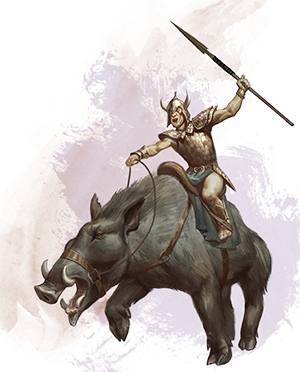 Tusk riders are a loathsome, bestial race which is, at best, disliked by everyone. Their name refers both to their own impressive tusks, and to the tusked giant boars which they ride. They are known to be great liars and boasters, and so cruel that trolls seem tame by comparison.

Tusk riders are noteworthy for two things. The first are the giant boars (Tuskers) which bear them over plain and mountain with equal facility. The other is their Cult of the Bloody Tusk, which glorifies combat and blood sacrifice.

Magic: Tusk riders worship three deities: a Silver Age Orlanthi hero; a gigantic wild boar; and a darkness demon (via the Cult of the Bloody Tusk). Popular spirit magics are Demoralize and Heal.