Despite the amazing variety of creatures in Glorantha, adventurers may interact with a wide range of conventional animals as mounts, foes, or even as hosts for spirits. These animals often have surprising and unexpected abilities: for example, the Esrolian python has a hypnotic stare unknown in terrestrial pythons.

Three types of bear can be found in the Dragon Pass area. The common black bear, the larger brown bear, and an even larger white bear variant. All bears are omnivorous, and many types show no fear of humans.

*A bear may either bite and claw twice or bite and hug in a round. If it chooses to bite and hug, both attacks must be against the same foe. If it bites and claws twice, it may attack up to three separate foes. 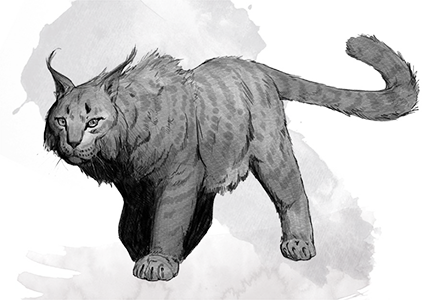 Shadowcats are dark-colored felines which range from the size of a housecat to that of a lynx. They are very quick and quiet, and are also known as shimmer cats because they are extremely hard to hit.

Shadowcats are social animals that hunt in groups that encircle their prey from different directions. They are domesticated by the Orlanthi to herd livestock and to hunt. They rarely attack humans or other large predators. However, when cornered or threatened, they will attack fiercely, jumping onto a foe and holding with the forefeet while biting and ripping with both hind legs at once.

In Dragon Pass, shadowcats are also called alynxes. All are sacred to Orlanth.

Note: A shadowcat first attacks with both claws and its bite simultaneously. If both claws hit, the shadowcat hangs on and rips with its hind claws on the next round, while continuing to bite.

Tuskers are gigantic boars as big as buffalo, ridden only by tusk riders. These beasts are fierce and ill-tempered but love their masters beyond all comprehension.

*A tusker cannot gore and trample the same opponent in the same melee round.

Wolves hunt in packs ranging from under a dozen individuals to up to 40 or more. If too many wolves are wounded or killed in a fight, the pack will slink off, unless starving. Wolves fight cooperatively. Several wolves may attack the same target, ensuring that most of them will not be parried or dodged. Or one or two large wolves may attempt to knock the target down—when it falls over, other wolves rush to attack.