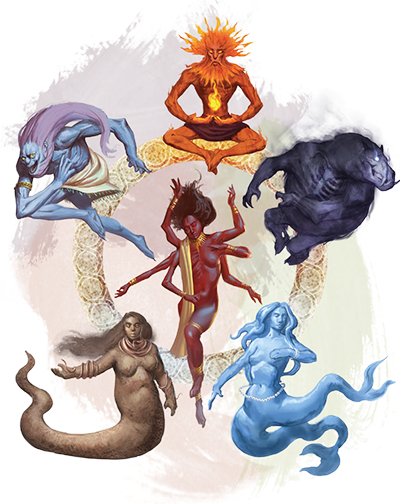 Elementals are spirits of one of the Elemental Runes (Air, Darkness, Earth, Fire/Sky, Moon, and Water) that have been embodied in the local environment. The lesser ones are not truly sentient but can be summoned and controlled by powerful magicians (most commonly those of appropriate Rune cults). More powerful and sentient elementals are known; such entities are usually servants of the gods or even lesser gods. Such elementals often have other powers and abilities beyond the general properties described below. There are also Lunar elementals, but they require a moon rock from the surface of the Red Moon to be summoned.

Most elementals are incomplete entities possessing only STR, SIZ, and POW. Their hit points are related to their SIZ, as explained later. An elemental’s SIZ is expressed as a volume rather than a characteristic number: for example, an elemental would be described of having a SIZ of 3 cubic meters (meters3).

If a point value is needed for an elemental’s SIZ, the elemental’s hit points may be used as its SIZ. Thus, if an elemental with 10 hit points climbed into a box and was lifted by an adventurer, its SIZ could be treated as if it were 10.

Most elementals lack INT and are not truly sentient. They are capable of being controlled by spells, but when left on their own, they will simply do whatever is natural: fire elementals burn flammable materials within reach, water elementals flee to the lowest possible spot, earth elementals sink into the soil, darkness elementals flee light, and air elementals breeze around.

All elementals can be struck in combat with ordinary weapons, breaking up their physical form and eventually disrupting them. They have only one hit location and no armor. When an elemental has been reduced to 0 hit points, it dissolves. Its spirit returns to its realm, from where it may be summoned again to inhabit another volume of material.

Air elementals (commonly called umbroli or sylphs) resemble mobile whirlwinds. All can raise a wind; even the smallest can lift and throw small objects. The largest can throw human-sized objects or can carry them aloft in the air.

Attack: An air elemental attacks by taking a character caught within it and throwing them to the top of their height, then dropping them. Damage done is 1D6 plus 1D6 per 3 meters of fall. A small air elemental can do a maximum of 2D6 damage, but a medium air elemental can do 3D6 damage and a large air elemental does 5D6. An adventurer may try to resist by pitting their STR against that of the elemental. If the character resists, they stay on the ground.

If there is more than one target within the area covered by the elemental, it may divide its STR equally among the targets and overcome each STR on an individual basis. Thus, a large air elemental with a STR of 30, having three targets within one area, can attack each target with a STR of 10. If it works against one, but not against the others, then one victim goes flying while the others stay on the ground. If so commanded, it will attack only one target, leaving the others alone.

Adventurers may choose to attack or cast spells at an air elemental instead of resisting, in hopes that the air elemental will be destroyed in mid-toss, causing only half damage for the toss. The characters will be tossed, however.

Note: More powerful and sentient air elementals are also called umbroli and are living winds. The strongest umbroli are minor gods, such as the Seven Winds of Dragon Pass, and are worshiped by local clans and tribes.

Earth elementals (commonly called talosi or gnomes) can shape the earth in almost any way: they can create pits, tunnels, or walls, expel objects, and even plow fields. An earth elemental cannot be summoned or travel through areas floored by quarried stone or solid rock. However, it likes very rocky soil. An earth elemental moves directly through the earth, leaving a trail of overturned and ground dirt behind it. It cannot leave the soil and looks like a whirlpool or pulse in the earth itself.

Abilities: An earth elemental can open pits in the soil, make tunnels, and find buried objects. It can also be used for holding objects stuck into the dirt, keeping loose tunnel roofs from falling, or forming mounds and ridges in the soil (no larger than the elemental’s volume). An earth elemental has many homely uses such as uprooting tree trunks, plowing fields, and clearing foundations for homes. In war, an earth elemental could be used to undermine or build fortifications. Earth elementals are perhaps the most generally useful elemental.

Attack: In combat, the earth elemental uses its volume to engulf its opponents, opening a pit beneath a foe with a maximum volume equal to its own volume. It can engulf about half of one human-sized victim per cubic meter of volume.

Note: More powerful and sentient Earth elementals are the lesser goddesses and gods of the Earth and have countless names. They are worshiped by local communities.