Dragon Pass is a mountainous region, centered on the 12-kilometer-high (7½-mile) mountain of Kero Fin, the highest peak in Glorantha and birthplace of the major god Orlanth. Although much of the area is rugged, there are many fertile valleys and wooded hills. The actual Dragon Pass is a narrow valley that crosses the continental divide near the sacred peak of Kero Fin, but over the centuries the name has come to be applied to the whole 225-kilometer-wide (140-mile) gap in the Rockwood Mountains, and to the region around this gap. 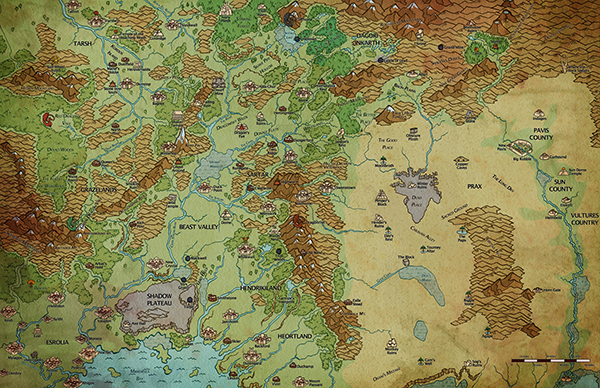 Dragon Pass is also one of the most militarily significant regions in Genertela. It offers the only passage suitable for armies to cross from Peloria (ruled by the Lunar Empire) in the north to the rich lands of Kethaela in the south. Much of the region is easily defended terrain, such as forests, hills, and mountains. Most importantly, its warlike population and many magical entities make it a daunting region for any army to pacify or conquer.

Two kingdoms have long fought for dominance in Dragon Pass: Tarsh and Sartar. These kingdoms are destined to fight over the control of Dragon Pass.

# The Homelands of Dragon Pass

Dragon Pass has often been a hotbed of activity and now is the focus of great and important events in Glorantha. It is likely to be the site of the Hero Wars, a looming, apocalyptic battle that will either transform or destroy the world. Though the rest of the world is still active and thriving, with events great and small transpiring all the time, RuneQuest focuses on the Dragon Pass area as its initial setting for adventure.

The following six countries or regions make up Dragon Pass:

Sartar is the default homeland for adventurers, a mountainous kingdom made up of Storm-worshiping hill tribes united by the royal house of Sartar. Sartar recently liberated itself from the Lunar Empire, and in doing so began the Hero Wars. It is ruled by Kallyr Starbrow, and is a hotbed of magical questing, petty feuds, and would-be Heroes.

Others consider Sartarites to be quarrelsome, reckless, and fiercely independent. Most are devoted to Orlanth and Ernalda and hate the Lunar Empire with a burning passion.

This rich and civilized land is ruled by a matriarchy. Esrolia is home to Earth Mother Ernalda and is the center for Earth worship. Nochet, its capital city, is the largest in Glorantha, ruled by the Queen of Esrolia. However, that magnificent city is threatened by the Wolf Pirate fleets, fearsome reavers led by the demigod Harrek the Berserk. Earlier though, these same pirates were instrumental in defeating the Lunar Empire in 1624 and forcing it out of the Holy Country.

Esrolians think of themselves as civilized, curious, luxurious, and sensual. Their styles set the standards in many lands. They are cosmopolitan, with knowledge of many distant realms. They dislike war, and favor negotiation over open conflict. Foreigners consider Esrolians as proud, ambitious, devious, emotional, and quarrelsome.

The Grazelands are a region of grassy hills and valleys inhabited by the Pony Breeders. This semi-nomadic tribe herds horses and rules over serfs originally from Esrolia, Sartar, and Tarsh. Their ruler is the Feathered Horse Queen, a powerful Earth priestess. Otherwise, Pony Breeder society is rigid and patriarchal, with everyone’s place determined by age and birth. The tribe is divided into a dozen clans; clan chiefs are elected but few among the populace are eligible. Pony Breeders consider themselves innately superior to all ‘groundsfolk.’

These barbarian nomads reside in the chaparral plains east of Dragon Pass. Each tribe rides and herds the beast it is named for: bison, bolo lizard, high llama, impala, rhinoceros, sable antelope, and even horses. Otherwise, the horse is strictly taboo for most Praxians (except for the Pol-Joni).

Praxians are proud and warlike, distrusting outsiders and each other. They hate Chaos with a passion and eschew civilized cults. Their lives are harsh and cruel, full of war, the very environment they live in hostile to them. A popular refrain among the Praxians is “Life is War.”

These are the major human Praxian tribes:

Another species, the Morokanth, are intelligent, humanoid tapirs, and herd nonintelligent humans.

At Prax’s edge is the River of Cradles, an arable river valley dominated by the city of Pavis and old ruins called the Big Rubble. The hero Argrath White Bull has united the Praxian tribes behind his leadership and has proclaimed himself King of Pavis.

The Kingdom of Tarsh is a province of the Lunar Empire and its rulers and urban populations have adopted the civilized culture and religion of the Lunar Heartlands. Lunar Tarshites are proud and arrogant: they dominated Dragon Pass for the last generation. They are loyal to the Red Emperor and the Red Goddess but are now torn between partisans of King Pharandros and those of his uncle, the great general Fazzur Wideread.

Old Tarsh is a group of tribes centered on the foothills of Mount Kero Fin that refuse to acknowledge the Lunar dynasty of Tarsh, remaining loyal to the Shaker Priestess. Once the core of the Kingdom of Tarsh, the tribes of Old Tarsh have been marginalized, and survive by hunting and raiding. Old Tarshites are poor, but proud and fierce. They view themselves as the rightful rulers of Tarsh and see Lunar Tarshites as temporary usurpers. They are notorious for being both vengeful and indulgent.

The northeast of Dragon Pass is dominated by the trolls, also called Uz. Two powerful queendoms, Dagori Inkarth and Cliffhome, are ruled by Darkness goddesses. That whole region is called Shadows Dance because of the pools of darkness that move across the rugged countryside. Trolls once ruled Dragon Pass and its surrounding lands and wish to return them to the shadows.

The alien draconic species called dragonewts have strange settlements throughout Dragon Pass, all connected by a series of magical roads. Dragon’s Eye is their largest settlement and home to their ruler, the Inhuman King. They are effectively immortal, for each time they die they are reincarnated in their settlement with their memories and experiences intact.

The Dwarf Mine is the entrance to an underground community of dwarfs, known as Mostali, residing among their forges and workshops. Rarely seen on the surface world, dwarfs are the best crafters in the world and possess the secrets of iron. They trade with humans, although their price is always high.

Beast Valley is home to the Beast People: centaurs, minotaurs, satyrs, fox women, manticores, ducks, and others. They are ruled by the demigod Ironhoof who periodically incarnates among his people to lead them.

Finally, and most significantly, to the north is the Lunar Empire, currently reeling from the disaster of the Dragonrise, but still the largest and most powerful empire in the world. It is ruled by the Red Emperor, latest in a long-line of wizard-kings responsible only to their mother, the Red Goddess. The emperor is immortal in that no natural death can slay them, although they can be killed. The Red Emperor is thought to be a single person who has worn many masks, as it seems that one has ruled for centuries.

← The World Myth and History →